We’ve all heard the rumour about engagement rings being worn on the third picture of the left hand because this was thought to be a direct connection to the heart; but where does the tradition really come from?  We thought with the number of engagements which traditionally take place today, Valentines day would be a great opportunity to have a look at the history of the engagement ring:

It is widely accepted that the concept of the engagement ring dates back to the Egyptians, around 2800BC.  As part of their burial customs they were often buried wearing rings, of a single strand of gold or silver wire on the third finger on their left hands, which was believed to be symbolic and a direction connection to the heart of the wearer. The history of the engagement ring can only be traced back reliably to ancient Rome; according to Pliny the Elder, in the 1st century AD, the groom gave the bride first a gold ring to wear during the ceremony and at special events, then an iron ring to wear at home.  The first documented use of an engagement ring goes back to Pope Nicolas I in 866 AD.  Pope Nicolas had an entirely conservative opinion on the intuition of marriage and he wrote that when a man becomes engaged to a woman, he gives her a “ring of faith”.  In these early days ‘rings’ of rushes and grasses were used as they were readily available, however over the centuries rings were made of a variety of materials. Some research shows that during the 19th century, during the Protestant Reformation a bride-to-be sometimes received a sewing thimble.  After the wedding, the man would cut off the cup of the thimble thus symbolizing that the young woman’s sewing was over and any dowry was complete.  The rim was then worn as a ring. Most researchers and historians agree that the first engagement ring, in the form we would be familiar with today, was given by Archduke Maximilian of Austria when he proposed to Mary of Burgundy in 1477. The ring was a simple yellow gold band set with thin flat slices of diamond in the shape of an “M”.  Since then, the designs and the value of the materials used have changed to reflect the times, but other aspects, such as how they are worn, have remained constant. Our tradition vision of a diamond engagement ring dates back primarily to the Victorian era, when diamond mines began producing vast quantities of stones, however, they were still perceived to be the domain of the noble and aristocratic, many still preferring to use simpler bands.

In 1938, the diamond cartel De Beers began a marketing campaign that would have a major impact on engagement rings even to the present day. The price of diamonds had collapsed during the Great Depression in the 1930s, and research showed that engagement rings were going out of fashion.  As part of their campaign, De Beers began to ‘educate’ the public about the 4 Cs (cut, carats, colour, and clarity).  And in 1947 the slogan “a diamond is forever” was introduced.  They wanted to persuade consumers that only a diamond set ring should be used for something as important as an engagement ring and that it would last a lifetime.  Their campaign was hugely successful, when they began only a small percent of engagement rings had diamonds – today, well, only a very small percentage do not!   We’ve ‘ahem’ suggested some of our favourites below, tell us about your engagement ring!  Please also do have a look at the Pretty Thrifty Budget Wedding blog which has some great suggestions for alternatives to the traditional diamond.

We say when it comes to engagement rings never be afraid to go for something unusual like this stunning cluster from Jewellerywebsite.co.uk, as well as bridal sets they have a great selection of unusual rings 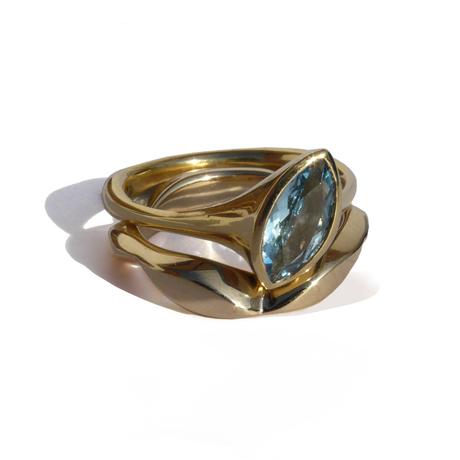 Speaking of non-diamond engagement rings we’re so delighted to find this stunning collection from Pamela Dickinson with matching sculpted wedding band. If you like the look of this do check out her work as there’s a fantastic variety, and you can also find it featured in the Ringleaders collection at http://www.pyramidgallery.com/ the Pyramid Gallery in York

If anyone has a spare $56,500 I wouldn’t mind this landing under my Christmas tree either!  Tiffany is a classic for engagement rings.