The sun is out and we’ve been breaking out our summer jewellery, one of the most fabulous summer jewels is turquoise which might seem a strange choice, but it’s an excellent summer stone as the bright colour gives a great fresh look to nearly every outfit and faux turquoise jewellery is frequently found on the high street during the summer season (ok we admit it’s also a great choice in winter too – amazing contrast against black and in fairness it is December’s birthstone, so let’s agree that it’s an all round jewel). 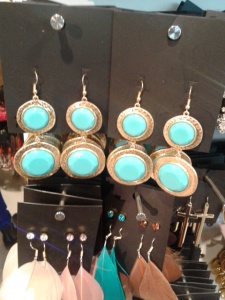 Turquoise is an opaque gem which has been valued by people for thousands of years due to its colouring.  It can be traced back as far as the Ancient Egyptians and Aztecs and is thought to have been introduced to Europe through Turkey, and it’s believed that this is how it was given its name.  Given it’s age there’s no surprise that myths and beliefs surround this gem, in ancient times it was thought that it could have some prophylactic uses (!) and that it changed colour to reflect the health of the wearer.  Whilst it’s true that Turquoise does turn green with dehydration and chemical reactions or treatments can change the colour even more,  as far as we know this doesn’t actually link to the wearer’s health…  Turquoise has also at times been believed to protect the wearer, and  has been used as both a talisman and holy stone. 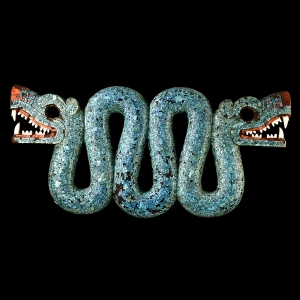 What is clear is wherever you go in the world you are likely to spot a fair amount of Turquoise in their museum pieces, turquoise was often inlaid into both jewellery as well as building decoration, bridles, swords to name but a few.  Turquoise was even found in Tutankhamun’s tomb in his burial mask amongst other items, and famously examples can be found in the British Museum such as Aztec death masks. 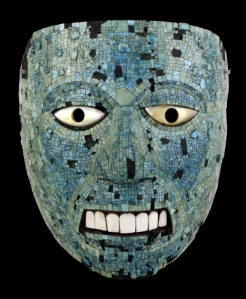 Much admired, but often under appreciated in modern society, Turquoise has been much copied throughout the ages.  It’s fairly surprising that it has stuck around so long, particularly preserved ancient pieces, as it’s not one of the more durable gems.  Even the best turquoise is fracturable and on the Mohs scale it’s just under 6 at it’s hardest, similar to glass.  It’s also a porous gem and can be affected by reactions with other chemicals.

Turquoise is generally known as a fairly low value gem in today’s society, due to the prevalence of fakes or synthetics, and variety of available treatments means that it can be hard to tell what is real and what is not.  This uncertainty affects the price, as does the large influx to the market that synthetics bring.  However, this has not always been the case and it used to be held in high esteem by the Apaches of North America.  It was thought of as a particularly useful gem giving authority, protection and if given (rather than bought) can bring good luck (particularly on a Saturday…) and preserve friendship.

Examples of our own Turquoise are below, despite it’s structure and nature it can be faceted, it also takes a great polish and there are some simply stunning examples of cabochon cut Turquoise.  One of our favourite Turquoise pieces at the moment is this gorgeous Astley Clarke friendship bracelet. 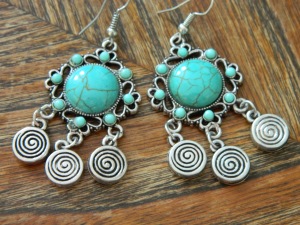 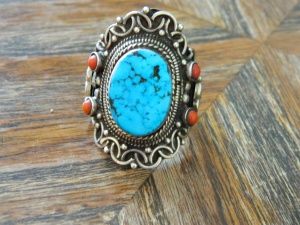 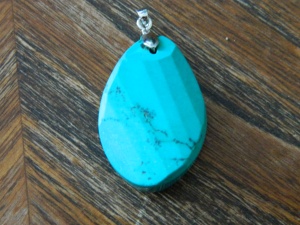 Turquoise has distinguishing inclusions caused by other minerals and metals being within the gem, but rarely it can be found without these, which is known as sleeping beauty turquoise.

There are lots of treatments which can be applied to turquoise, and it is often treated to enhance its durability as in its natural state it is not particularly hard and suffers from being highly porous.  Other treatments are used to change the colour of the gem and there are some great examples particularly of purple turquoise.  Be warned if you are bothered about your turquoise being treated, whilst a gemmologist may be able to test to ascertain they type and occurrence of treatment, such tests are likely to damage your stone.

Some of the more basic treatments are waxing and oiling turquoise which enhances the colour and lustre of the gem, whilst these add to the appearance of the stone it can result in some discolouration over time if the stones are exposed to too much heat or sun.

Some turquoise is “stabilised” by having resin or plastic inserted into the stone under high pressure, this treatment is more stable than wax or oil so has better long-term results and can lead to otherwise unusable turquoise being brought up to gem quality.

Other treatments are more radical, such as reconstitution or “block” turquoise which is formed by bonding small fragments of turquoise with resin, or gluing thin turquoise onto another material to reinforce it which is known as “backing”.

Whilst it’s important to take care of all your gems, the nature of turquoise, even when treated, means that chemicals such as oils, perfume or sun cream could lead to discolouration or damage of your stone.  The gem can dehydrate so try to keep away from strong sunlight for prolonged periods and store in a breathable material.  Due to it’s softer nature it’s also preferable to keep your turquoise away from items that could scratch it so a special section of your jewellery box or a pouch is a good idea to try and protect it.  Also bear in mind that it can’t be cleaned with the majority of jewellery cleaners, so when you take it off try giving it a gentle rub with a lint free cloth to keep it looking at its best.