Palladium is one of the six metals in the platinum group, like platinum it is a rare precious metal, mined mainly in Russia and South Africa.  It was not identified as a separate element from platinum until 1803 when it was isolated.  Palladium was quite rare until 1930 when the International Nickel Company of Canada began producing it in significant quantities.  In 1931 a German company developed and patented alloys of palladium with silver and gold, and at the time it was used in dentistry. 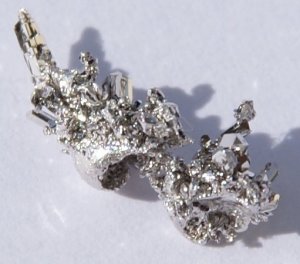 Jewellery designers started using palladium in the late 1930s, and the use increased during World War II when it was used as an alternative to platinum.  The supply of palladium dropped in later years and the price was relatively high compared to other metals so it was seldom promoted as a jewellery metal.
In 2009 Palladium was officially recognised as a precious metal and received a voluntary hallmark in July 2009, and a compulsory one in January 2010.  Since this recognition it has increased in popularity within the jewellery world, combined with the huge rise in the price of gold and platinum at around that time, palladium offered an attractive alternative to those seeking a white metal.  It features both the advantage of around half the price point of platinum whilst retaining the durability associated with it.  Further it is a much lighter metal so offers designers the chance to make larger statement pieces which are easy to wear, hypo-allergenic, affordable and with no risk of tarnish.
Some argue that palladium should not be considered as an equal alternative to platinum, and that it is best thought of as an alternative to white gold.  However, it has the advantage over white gold of not requiring rhodium plating to maintain it’s colour.  Additionally palladium 950 provides a higher purity than white gold and has a whiter colour, although it is slightly darker and greyer than platinum.
Palladium owes much of its increased publicity to the British based Palladium Board, established to promote the use of the metal within fashion.  It kicked off its 10 year “Palladium Visions” campaign in 2012 by creating initiatives with leading British designers, most notably Dame Vivian Westwood and Hussein Chalayan.
Throughout the US and China, the Palladium Alliance promotes the metal through sponsorships within the jewellery trade.  In January 2013 the winner of the Alliance’s first annual design contest was awarded 30 ounces of palladium to create a jewellery line.
It seems clear that palladium has a future in fashion jewellery, not just because of its price but because of its qualities with offers the designer a freedom of expression that would not be comparable in other precious metals, but it is also starting to become more popular in wedding jewellery, could it be that one day in the future it will be uttered in the same breath as gold and platinum, accepted into the fold and no longer an outsider…